Welcome to the
Sammie and Melissa Markham Home Page

Click here to learn about the Wedding CD Playlist .


The Melissa and Sammie Story
from Three Points-of-View

A Toast and Tribute to Sammie and Melissa


I first met Sammie on a whaling ship off the coast of Nantucket in 1984. He was first mate of the ship and it was my job to polish the harpoons. We became fast friends, and worked great together, and really bonded over our love of whaling. Until the Coast Guard informed us that whaling was actually illegal. Of course we were both arrested, but because of my small hands I slipped out of the cuffs and escaped. I set up a small souvenir shop in Mexico. Sammie wasnt quite so lucky.

But Sammie has often said that the time spent in jail was the best thing that ever happened to him. Many of you may not know, he first met Melissa in prison. She was a volunteer with a Literacy Behind Bars program called Read Between the Lines. Sammie was wandering around the prison looking for the snack room and walked in on Melissa reading to a man who was in for selling Panda bear pelts out of his van, I think. Anyway for Sammie it was love at first sight. From what I understand Melissa took a little more convincing, and Sammie had to pretend to be illiterate to get to spend more time with her.

Each day Sammie would tell Melissa he loved her, and after several weeks of reading together, one day, right in the middle of One Fish, Two Fish, Red Fish, Blue Fish Melissa turned to Sammie and said, I love you too. Melissa was able to convince the parole board that Sammie was no longer a threat to sea going mammals and he was let out on the work release program.

Once Sammie got out he contacted me, and invited me to work with him again. I was excited to be working with Sammie again, and felt it was probably safe to return to the States. Sammie was still trying to impress Melissa and thought the uniform might do it, so we got jobs as volunteer firefighters. But that only lasted about three months because I had problems sliding down the pole, and we realized there wasnt a whole lot of money in volunteer firefighting.

We went through a series of failed businesses. We sold extra wide ladies shoes on the internet. We developed a kind of robotic seeing-eye dog for the blind. Which we eventually abandoned after a series of lawsuits, which, for legal reasons, I cant really talk about. And of course, our most famous venture I guess was the band. I was the manager. Sammie was the front man and they were called Vernon P. Funkweiler & the Funkadelic Funktones From Funkytown. It was a funk band. The band split up after the second album because of mismanagement, but mostly because of constant internal disputes about the name of the band. This may have been for the best because Melissa refused to marry Sammie until he had a decent job with a steady income, and Sammie realized that would never happen as long as he was working with me. So we parted ways, vowing to always stay in touch.

I decided to get into the film business and so I moved to the only logical place for that, Utah. And Sammie moved back east somewhere to dosomething. And I didnt hear from him again until I got the wedding invitation. I was very excited to see that Sammie had finally convinced Melissa to marry him.

Sammie, weve been through a lot together and youve always been the best friend a guy could have. Melissa its been such a pleasure getting to know you and I look forward to our friendship growing even stronger in the coming years. Sammie I really dont think you couldve found a better girl than Melissa. And Melissa you probably couldve done better than Sammie, but I guess its too late for that now. I love you both. Best of luck and Congratulations!!!

As Sammie's parents, we are generally the last to know anything about his social life, but let us share what we know. There have been two very serious relationships in Sammie's life:

We were a little confused by the names and still mostly in the dark, but we were becoming very hopeful. On April 5, 2005, near the Jefferson Memorial with the Japanese cherry blossoms in full bloom, Sammie fell to the ground and said he couldn't go on without her (ASKED MELISSA TO MARRY HIM.) She ordered him into the cart and agreed to haul him the rest of the way (SHE SAID YES!)

Sammie is in love. Missionaries are told to expect great blessings for the family members they leave behind---none could be greater for us than this one.

A very happy Melissa and Sammie at Jefferson Memorial
a few mimutes after becoming officially engaged.

It was a dark and stormy nightnot at all the kind of night conducive to a campout. Unbeknownst to Sammie, however, hell had frozen over that morning and he was therefore destined to meet his eternal companion. At the time, though, all he wanted to do was go camping.

Melissa was in the midst of a busy summer teaching reading classes, but felt estranged from her social life and decided to spend an evening camping with friends, even though she had a full day of teaching that began early the next morning.

Despite the rain, the camping trip ended up being a success (if, of course, success is defined as Melissa and Sammie having a few seconds of small talk every other week before chatting with someone else).

The people assigned to give talks that day were asked to speak on the importance of going to the temple. The first two spoke on the joys and blessings of temple attendance. The third, who shall remain nameless, spoke on the joys and blessings of growing up thinking he was an orangutan. Melissas favorite part of the talk, however, was when Sammie (oops! he was to have remained nameless) read an e-mail from his father in which Sammie was asked what he wanted for his birthday and responded that he wanted to be an orangutan so he could live in a zoo. His fathers response, which Sammie read, was, Speaking of zoos, for your next charmed move, why dont you find a lovely young lady who will see through your goofy façade, marry you, and then drag your sorry butt to the Celestial Kingdom.

At a fireside later that evening, Melissa related to Sammie how, when she was younger, she had mispronounced orangutan as orange-you-tan. For the first time, Sammie saw past her Utah background and thought, I should ask her out! Which he did. It took him a few weeks, but he did it.

Knowing that Melissa liked to laugh, Sammie took her to a Comedy Club, which she seemed to enjoy. However, she later divulged that she laughed harder at the antics of her date than she did at the professional comedians.

The next weekend Sammies band, Barefoot, performed at a church dinner. Unbeknownst to Melissa, Sammie had convinced his band to learn her favorite song, Brown-Eyed Girl by Van Morrison. Melissa was especially impressed when Sammie, performing under his professional name, Vernon P. Funkweiler, walked out wearing a brown leather jacket, a polyester butterfly-collar shirt, sunglasses, and a huge black afro.

The dating continued casually until the middle of November when Melissa went to tithing settlement. Sammie, knowing how much Melissa trusted the Bishop, spent the day e-mailing the Bishop, convincing him to talk Sammie up to Melissa. The Bishop agreed and, true to his word, he spent approximately 30 seconds of the interview talking about tithing and promptly moved to Melissas social life. Yadda yadda yadda, the interview ended, Melissa walked to the bathroom, looked in the mirror and said, Sammie Markham? Really? Nonetheless, Melissa heeded the counsel of her Bishop, and by Thanksgiving had a serious boyfriend. (Not to insinuate that Sammie has ever been serious in this relationship, let alone any other aspect of his life. Serious is just something you say for things like this.)

The next few months consisted of laughing, meeting family members, goofing off, road-trips, tickle fights, hiking, more laughing, more goofing off, and (their friends knew it was inevitable) ring shopping.

On April 5th, at the Thomas Jefferson Memorial, underneath the cherry blossoms, Sammie surprised Melissa with a dozen roses and a diamond ring. Screaming ensued. (The good kind of screaming, folks.) Kissing soon followed. As the High Schoolers on their Spring Break trip to DC were laughing at Sammie and Melissa, Melissa enthusiastically retorted, Its not everyday you get engaged!

The saga continues . . . Melissa is using all of her powers of persuasion to convince Sammie to at least wear the same color socks on the wedding day. Sammie is racking his brain to come up with ways to make Melissa laugh at the altar. She is teaching at American University and Northern Virginia Community College. He continues at SAIC and is settling in his new condo in Falls Church, Virginia, where he and Melissa plan to live after they are married (at least until Sammie finally convinces Melissa they will be happier living in a zoo). In the long run, they are looking forward to August 18, where they will be sealed in the San Diego Temple. In the short run, theyre counting down the days until May 19 (Starwars Episode III release).

May the force be with them. 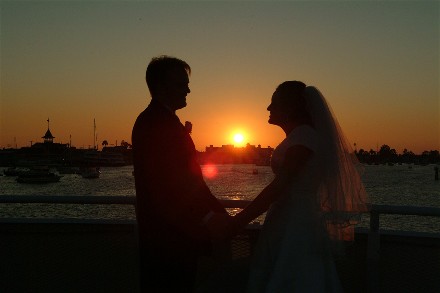 Mouseover to see the real Sammie

Click here to see some of Sammie's photography
This takes a minute or so to load, but is well worth the wait!